Note: As of patch 1.0 this ancient is no longer available for purchase in game and can only be obtained by importing your save file from an older version. 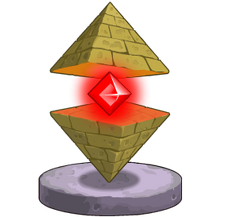 "Midas walks with you to greet this ancient, and shows you his purse. As you get closer, the cloth material the purse if made out of gets harder. Suddenly, you could swear it turned into leather. "Upgrading this ancient will probably make it harder to kill Treasure Chests. I would leave this one alone," Midas says. "It sounds worthless to me.""

Adds HP to Treasure Chests while Golden Clicks are active.

The cost of leveling up Thusia is: your current Ancient Summoning cost (Which seems to follow no real equation but grows exponentially, see Ancients for prices.) at level 1, and then costs n1.5 souls to level up, n being equal to the next level.

This ancient has no maximum level.

1. Take your Auto Clickers off the monster.

2. Move your gilds off your main hero with Q.

4. Put your Auto Clickers back on the monster.

5. After beating the Treasure Chest, put your gilds back on your main hero.

You have managed to maximize your gold! Congratulations!

However, the above tip is rather useless in the late game as one or two orders of magnitude do not make any significant difference.