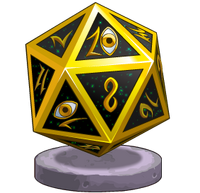 "Forged from a million lucky coins, this monument is the strongest lucky charm in existence. Place your bets, go toe to toe with death, fight with your mother-in-law and live to tell the tale! Nothing can possibly go wrong when you're in the vicinity of Revolc. Your heroes recommend you haul it with you for when you find clickables."

Revolc increases the chance of getting double

(this depends on which site you are playing). Revolc's effect goes toward a +96% chance (since there is a base chance of 4% to gain double rubies), giving the player 100% chance to get double rubies when having rubies in a clickable. Its effect follows a logarithmic formula.

Revolc's cost per level is 2n, with n being equal to the next level.

The chance to get 2

Retrieved from "https://clickerheroes.fandom.com/wiki/Revolc,_Ancient_of_Luck?oldid=55166"
Community content is available under CC-BY-SA unless otherwise noted.