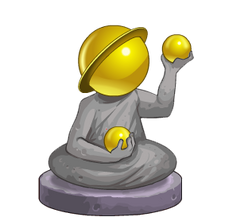 "You feel appreciated as you approach this monument. Your hard work and dedication start to payoff."

+30% gold from Golden Clicks per level.

The cost of leveling up Pluto is your current Ancient Summoning cost (Which seems to follow no real equation but grows exponentially, see Ancients for prices.) at level 1, and then costs n

Hero Souls to level up, n being equal to the next level.

There is no maximum level for this ancient.

Retrieved from "https://clickerheroes.fandom.com/wiki/Pluto,_Ancient_of_Wealth?oldid=60753"
Community content is available under CC-BY-SA unless otherwise noted.