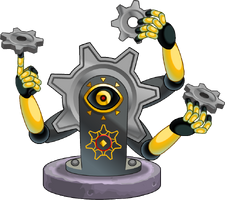 Nogardnit increases the amount of DPS per unassigned

Auto Clicker when idle (no clicks for 60 seconds), at +10% per level, although the effect is affected by

Nogardnit's cost per level is n1.5, with n being equal to the next level.