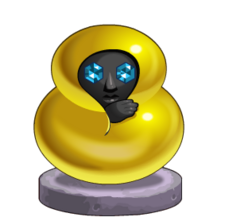 "Line your pockets with the spoils of war, for Mimzee grants booty far greater than before.You smile as she whispers into your ears: "Earn real money!""

Treasure Chest you find than the monsters themselves. With this ancient, and Dora,

Treasure Chest will make up all of your

Gold earned as they start giving thousands of times more

Gold than the monsters themselves.

Mimzee's cost per level is n, with n being equal to the next level.