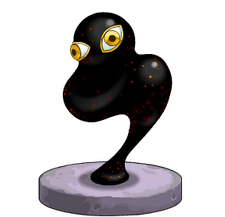 "A darkness radiates from the monument, causing many things to become difficult to see. You catch a brief glimpse of movement nearby... Was that Abaddon? Upgrading this ancient will allow you to sneak past monsters when exploring."

Kumawakamaru reduces monsters required to kill per non-boss zone. The integer part of its effect shows the reduced monster per normal zone, while the decimal part is the chance to get one monster fewer.

Kumawakamaru's cost per level is 2n, with n being equal to the next level.

The monster reduction follows the formula: