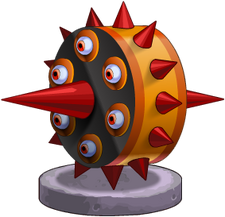 "It has been days since you last slept, yet you do not feel at all tired. The ancient has been driving you all along. You wonder how much longer you can go on; there is no end in sight."

For those who use an

Auto Clicker, this Ancient is a must have as it will increase your DPS far beyond what the

Hero Souls you would gain in the next few runs could get you, even at level 1.

Juggernaut provides an additive, stacking DPS bonus for being active and clicking at least once per 4 minutes and 40 seconds on the monster (does not need to do damage). After clicking 3 times, the combo will start at 3 stacks and 1 stack will be added for everytime you (or an

Auto Clicker or Clickstorm) click on a monster. There is no limit to the number of stacks you can gain.

Keep in mind, your stack will deteriorate after 4 minutes and 40 seconds without clicking. A single click will reset that, so you can keep going indefinitely as long as you click at least once every 280 seconds. If you don't, then it will then drop as it did before, at a rate of 5% of your total combo that you had every second. One second of this degrading can set you back a couple of minutes if the stacks are high enough.

Juggernaut's cost per level is n1.5, with n being equal to the next level.