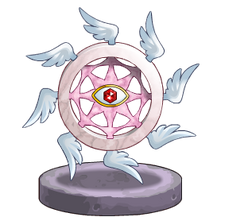 "Cid walks with you to visit the monument. "Check this out," she says, and flips a coin. Heads. She flips it a few more times. Heads. Heads. Heads. "Every time," she says. A game of cards sounds incredibly tempting at the moment."

Fortuna gives a chance to get platinum coins instead of normal gold coins while the game is running. Platinum coins have 10 times the value of regular coins. There is no base chance for 10x gold.

On the mobile version of the game, the coins dropped are the same colour as regular coins but still provide a 10× bonus.

The effect works on regular Monsters, Treasure Chests, Clickables, Golden Clicks, and Bosses. It also works in addition with other ancients like

Mimzee. Because the effect works on

Treasure Chests, it can give you a huge boost in your gold count when both the chest chance and fortune chance overlap.

Fortuna's cost per level is 2n, with n being equal to the next level.

The chance to get platinum coins follows the equation: